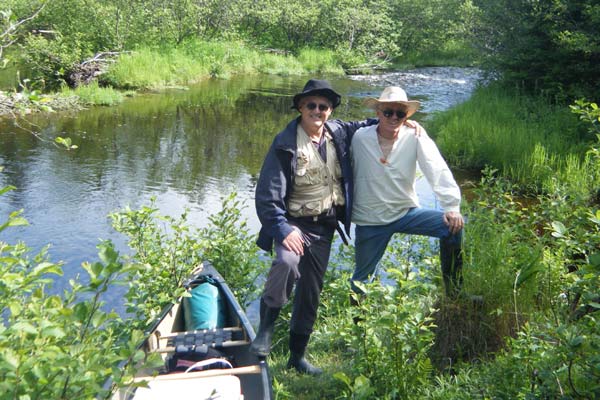 Ken and Laurie pose at the put-in on the Bartholomew River. Pic by Jackie O'Donnell.

I bet we all have a river we've been longing to run someday. We've heard stories about it, looked at its meanders on our maps, and waited for the wonderful window of opportunity to open onto the long-wished-for stream.

For me, it was the Bartholomew River in central New Brunswick, a tributary to the Main Southwest Miramichi. My brother Laurie has run it several times, sometimes enjoying sweet sunshine paddling, sometimes enduring hardship frought with deadly peril.

We could have had our pick of rivers this late June. Normally, most New Brunswick rivers are too shallow to run by this time, but a cool spring and heavy rains created ideal paddling throughout the province.

Our driver shuttled us to the small woodlands bridge over the South Branch of the Bartholomew. There is a small lane on the right just as you approach the bridge, and it leads a hundred metres or so, past the junction of the North and South Branches, to a slope down to the stream just wide enough to back your vehicle down and unload into a pool.

The stream is maybe a few metres wide between pools this high up, but we have no problems slipping past the alders and down the brook. The water is nicely deep so we don't have to worry about grounding out in the ripples. The bed is mostly fist-sized gravel with very few larger rocks, making for smooth sailing.

It's only when the stream forks around islands that we encounter difficulty. We are still enjoying quick water, and the alders keep their distance for the most part, meeting overhead in an arching canopy.

Choose your channel wisely, sometimes it narrows into an alder maze.

But when our channel forks yet again, we're in for bushwhacking and deadhead dodging until our narrow alder hall rejoins the main flow. A couple of times, I had to scramble to the bow (we were both running solo) and power the boat through the alder maze by poking with my paddle and pole, and pushing the alders aside with my arms as I swerved every which way to follow the current.

We faced several sweepers the first two days as well. At one jam, I tucked myself into a fetal position between my seat and the centre thwart, making sure no part of my anatomy protruded above the gunwales. Laurie guided my boat under the tree between the spiked branches. I watched from below as my boat and I slid under the massive trunk, and the moment the stern was clear, I uncoiled my torso, grabbed my paddle and swerved past the alder grabbers into clear water. Laurie followed my trail moments later.

On other occasions when a sweeper spanned the stream, we were able to come to shore, reach under the fallen tree and snap off the fangs that barred our progress. Only once did we have to drag our boats over the grass around a jam, and then only for a few metres. 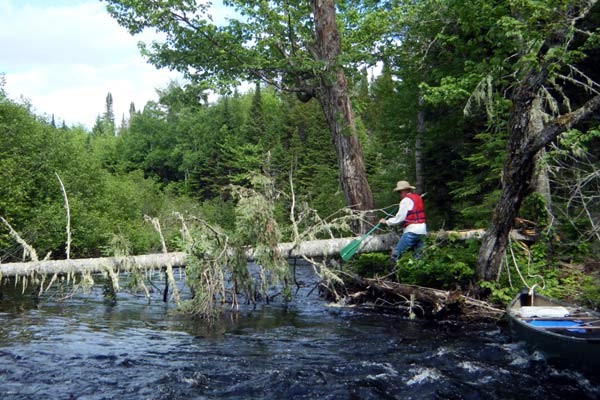 Laurie pokes off a few snags so we can slide under one of the several sweepers on the river.

However, I did get into trouble at one point. I was running a swift and narrow side channel just wide enough for my boat and clear of alders ... almost. Just as I saw the main channel opening up straight ahead, one more branch blocked my way. I could have ducked under ... should have, I guess ... but I reached out and up to push it aside.

My boat flipped in a flash, and I was in the water. Happily, I was able to grab my boat, and prevent it from filling up with too much water, and wrestled it to shore fairly quickly. Luckily ... or due to my foresight ... all my gear was tied in, so I didn't lose anything ... except when I realized my head was bare.

I lost my black felt cowboy hat, the one I had bought in Montana, with a chin strap and real earflaps. I was even wearing the chin straps nice and tight, and it still came off in the current.

Shortly after I bailed out my boat and climbed back in to resume the float, we came to a beaver dam which spanned the stream. I fetched up on top of the dam, and reached for my trusty six-foot snubbing pole to push off and over the woodwork ... oh no, it was gone too. Maybe some beaver will find it, and install it in his lodge as a conversation piece.

As the afternoon wore on, we began looking for a campsite. The islands were muddy and overgrown, and the banks were steep and lined with alders. We finally stopped at a snowmobile bridge, and found a dry and level patch on a round-about at one end of the crossing, just off the main trail.

Oh, didn't I tell you about the brook trout we caught? and ate? m m mmmmm...

It wasn't glamorous, but it served our purpose. We set up our tent, and found enough twigs and standing deadwood to build a nice fire.

Well, my foldable chair had gotten wet earlier when I went for my little swim, so I set it up near the fire to dry out. After a suitable spell, I pronounced it dry enough, and settled into it.

But it wasn't quite dry just yet, and I got my tush damp. I decided to stand with my tush to the fire for just a few moments to dry it off __

Nanook, you're on fire! screams Laurie. A spark had hit the heel of my left sneaker, and it burst into a hot rubber-black flame. In a flash, the fire leaped up the back of my pantleg. I hit the ground immediately and started rolling and thrashing, and Laurie rushed over and with three quick kicks, stomped out the flames. Thanks, brother!

We looked at my leg. I had burnt the skin off in an area the size of a beer can bottom. We dressed it with gauze and some vet-wrap from my first aid kit. It hurt for a little while, but soon settled into a manageable ache for the remaining two days of our trip ... as long as I didn't knock the injury against my canoe seat or anything else. I finally went to the emergency ward once I got home and had a doctor look after it properly. 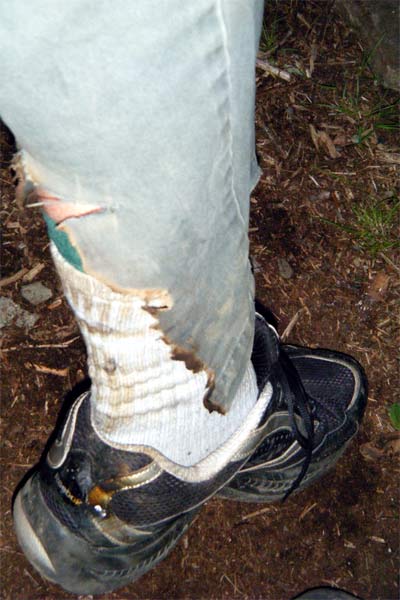 It happened in a flash. My leg was badly burnt. I'll never turn my back on the campfire again.

Day two on the river was a little easier, as it grew wider by a number of side streams. There were still several braided alder-lined channels, beaver dams and the odd sweeper and logjam to navigate. Since these obstacles come and go with every spring freshet, it's no help to you if I attempt to describe them or pinpoint their location.

There was a fine camping spot at the Mar Wood bridge, a grassy level turnout with no litter, not even a tossed beer can. But it was too early for us to make camp that day.

Perhaps Laurie's memories had faded, maybe the stream had changed course, but Laurie couldn't find any of the sites where his gang had overnighted in previous years. We finally found clear and level ground for our second night beside the ruin of an ancient camper-trailer about 15km upstream from Blackville.

Laurie fessed up that he was getting a little anxious about finding a decent camping spot, but it proved to be a fine rest area, with just enough wood in the thickets for a fire. I stayed well away from it this night, thank you. 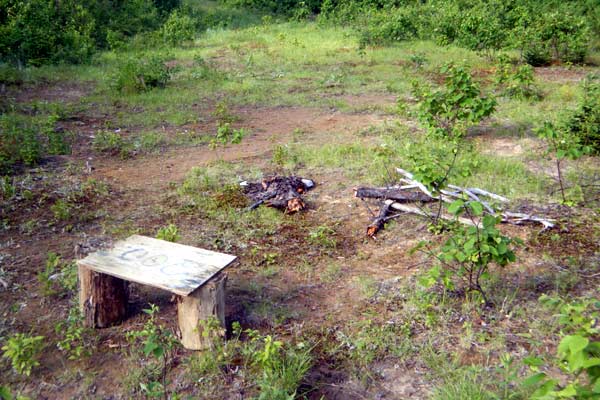 The campsite was level and dry, but the mosquitoes were voracious.

The flies were waiting for us outside our tent when we got up the next morning. They didn't bother me too bad ... apart from a few bites that I am still scratching tonight two days later ... but they did get to Laurie a little. The blackflies found some way to get under or through his head net. But he's a hardened veteran of the Bartholomew, he tuffed it out okay, and after a fine breakfast, we ran the rest of the river to Blackville by noon.

The river here is wide and deep, a little slow but not too bad, as we had warm temperatures with a pleasant breeze. Laurie remarked that there were quite a few more lodges in this section than what he remembered from ten years or so ago. We stopped and chatted with a few of the locals, who were mainly interested whether we had seen any fish on our trip.

We rounded the cape at the mouth of the Bartholomew and paddled upstream on the wide and mighty Miramichi about a hundred metres to where our vehicle was waiting at the Blackville municipal park.

I would recommend the Bartholomew to paddlers seeking a stream less traveled. But you will need experience in bush-whacking and logjam jousting, and you will also require creative and resourceful camping skills. Be aware that the Miramichi wilderness can be seriously bug-ridden in early summer.

There are no "rapids" like you will find upstream on the Main Miramichi. Watch the river flow gauges ... we started at 2.0 and finished at 1.5 on the Blackville measuring station of the Miramichi ... and it was ideal. Much lower, though, and you'll be walking the stream.