Sometimes the actions of your paddling buddies put you in a very awkward spot. Not to mention downright dangerous.

There were three of us on a canoe trip on the third weekend in May, the traditional long weekend when every canoeist worth his salt is out on some river somewhere in New Brunswick. This particular year, however, the water in every usually runnable river was low due to drought. 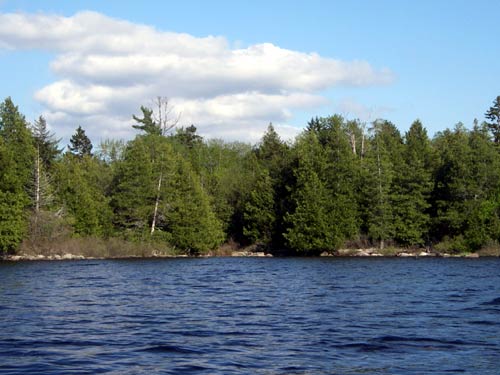 Looking towards the outlet to Victoria Lake

So we, that is Joe, Jim and I, set out on a lake trip. We decided to paddle down West Long Lake, and continue down a narrow thoroughfare to adjoining Victoria Lake and back.

As usual, we bought along lots of beer and steaks. This campfire promised to be relaxing and enjoyable.

The trip down the lake was uneventful. There was little wind, and there were no motorboats to spoil the tranquility. Only a few cottages lay sprinkled in the odd cove.

The campsite lay at the far end of the lake, just one cove away from the entrance to the stream which joined the lakes. Soon our tents were up, a cheery fire was lit, and steaks and cold beer were enjoyed, heartily I might add.

It was near sunset when my friends decided to go for one last spin on the lake, and persuaded me to join them. Why not, the water was calm. The evening was serene. So they set out ahead of me, into the next cove. 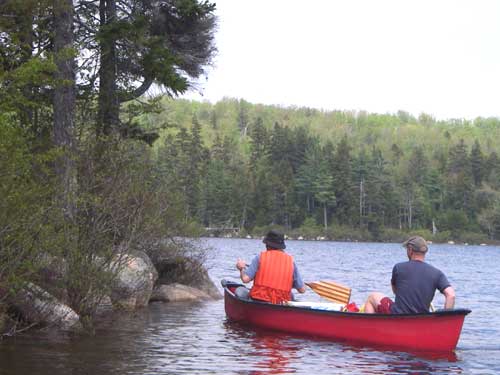 Let's go for an evening paddle!

"Hey Ken, isn't that where the river goes down into the next lake? Let's check it out!"

The stream was only a few feet wide, just an opening between the trees, and I had no idea what it was like. Rocks? Falls? Sweepers? But with the innocence of babes, Jim and Joe pointed their canoe to the end of the cove. then slipped between the trees and out of sight, down the thoroughfare in the fading light of day.

I wasn't sure what to do ... follow them, or head back to camp. If something happened to them, how could I help by sitting by myself around the fire? I groaned inwardly, and set off after them. 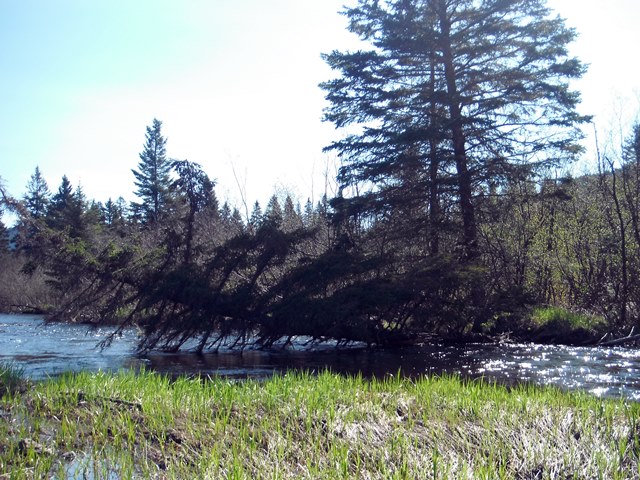 A sweeper can lurk around the next bend, be careful.

It was still light enough to see where I was going. But I had no idea what lay ahead, nor what happened to my buddies. I heard a few whoops and snatches of animated conversation, then the current began to speed up and the stream narrowed even more.

It was maybe on the third turn that I encountered the sweeper. The downed tree spanned the entire width of the stream, with its main trunk about six feet above the water. Its branches spread thick and tight to the water line all the way across.

My buddies evidently had no trouble getting through, as there were two of them. I suspect the buddy in the bow held the branches apart, and they slid through with the greatest of ease.

I however was in trouble. I was alone in my boat, with no buddy to help me. I couldn't get to shore in time to avoid the sweeper, and was sucked right in. 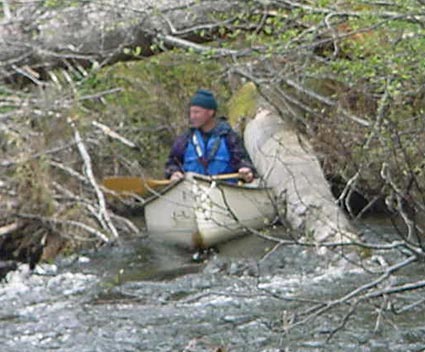 I dropped my paddle into the boat and rushed amidships, doing my damnedest to keep the boat straight, and prevent it from yawing sideways and taking on water.

I faced my darkest fear, getting swept into the clutches of a sweeper and being held underwater to drown.

The sun had set in the narrow gorge. It was dark and getting darker. It took all my concentration to keep my footing in the tippy boat and thread my way between the branches.

Several times, my boat shifted sideways and dipped its gunwales down to the water line. I called on my last reserves of strength, and used the balancing skills of a tightrope artist I didn't know I had.

Finally I pushed the stern clear of the last grasping branch, and floated into the calm water at the foot of the portage trail.

"Hey Ken, what kept you? I thought you were right behind us!"

It seems they had no idea of the ordeal I had just been through. For them, it was an innocent lark, a mere diversion for the sake of adventure.

For me, it had been a narrow escape from a deadly trap of sharp, grasping, drowning branches. I was exhausted. It wasn't long afterwards that I plodded back up the portage trail and crawled into my sleeping bag.

Maybe I should have let them go down the stream by themselves. What would you have done?