June 12th, 2020. We'e been doing a "new" river every year since 2016 when my wife asked, "What do you want to do for your birthday this year?" I knew of the Gounamitz from trips in with my Grandfather Albert McGrath and my Dad as a kid and had scouted it the previous September and dreamt of it all winter/spring. It was a small crew, only four of us (Me, Beth, Todd and Shawn), with darn restrictions watering down the group that year. But a group of four was very appropriate for this river, a larger group and the Gounamitz could get messy. BTW, all of us in 12' touring kayaks.

We had "Le Barbeau" (the bearded one) from Arpin Canoe shuttle us up as our put in was unclear. We put in at Poacher's Road just off the main road, which escapes me now, but I think it's the Gounamitz Road, about 8km from The Montgomery Bridge/Chalet Restigouche. Our put-in was about 22 km from the Little Main Restigouche via the river. It was a beautiful day, almost too warm at the start.

The water level using the Restigouche gauge at the Kedgwick was 1.2m, a good level for this river, perhaps a hair low for canoes. We never bottomed out or had to walk. I'd say you'd be safe down to 1m and not sure on the high side as this river presents some challenges. Arpin Canoe would be your spot to ask.

Dropping into the first falls; it's a 90 degree left, not sure a canoe would swing it, but I guess that depends on the paddler.

Day 1, the first 12km are lots of fun, one of my favorite river stretches, but a challenge. It's a small and ever moving river. About 2km in we came across a tree blocking the river and had to portage over some difficult rock and a little drop. In the eddy were a dead frog and mole, not a great omen. Not long after this the river split, we went right and just around the blind corner ... another tree, although you could limbo this one or stop with your hand and duck under. Another foot of water and this would have been a dangerous spot and very likely a swim.

the tree around the blind corner, from the look of it, it was wedged there for a while

From here there are three noted "falls" on the Gounamitz over the next 5-6km. After much scouting I ran the first drop, much to the chagrin of my wife. Just as we stopped to scout it the clouds moved in, the winds picked up and it got really chilly. I must say my stomach was turning a bit, but after the others had portaged and I had scouted this thing for 30 minutes there was no turning back! There was intimidating white water, fairly narrow, a hard left turn near the top, but no major concerns after all. Falls two was a no-go, no matter how times I scouted it and tried to muster up the courage. Falls 3 is nothing but a 6' sloop to the right side, two of us slid through with a whoop! But do scout it as you might have trees in the way and it's a complete blind drop.

The second falls looking down from the old campsite. Too many big jagged rocks in that mess, next time I'll bring a helmet and a skirt (yes, forgot it) and ponder it again.

At this point, a small tributary joins from the west, perhaps the South Gounamitz as I know we were on the main north branch. A beautiful spot. There are some class one rapids with a few small drops after this, but aside from the three falls, there are no major rapids. All major drops can be portaged, short, yet somewhat tricky walks. The last 10km was fast moving, river remained small, but fairly straight and as noted some white water and class I rapids, all easy stuff. We camped just above the Little Main Restigouche where an old bridge was washed out.

The third falls, shoot down the right side

Other than this spot, campsites on the river were hard to come by. You can camp at the 2nd falls (the one you should portage save for white water kayakers with helmets), where the remnants of an old fireplace remain. This is also close to where a spruce bud worm pilot (Robert McLean) went down and sadly passed on June, 8th 1982. We were on the water around noon and off around 8 pm, taking us much longer than expected for what seemed like a short distance on a moving river. The portages took time. The scouting of the falls took time. And I know we had one swimmer for sure, perhaps two that day. And just as we landed a down pour hit. The tents went up and a few took shelter while I attempted to make what I felt was a doomed fire, but I got it going and 45 min later the sun came out just long enough so we could watch it set. 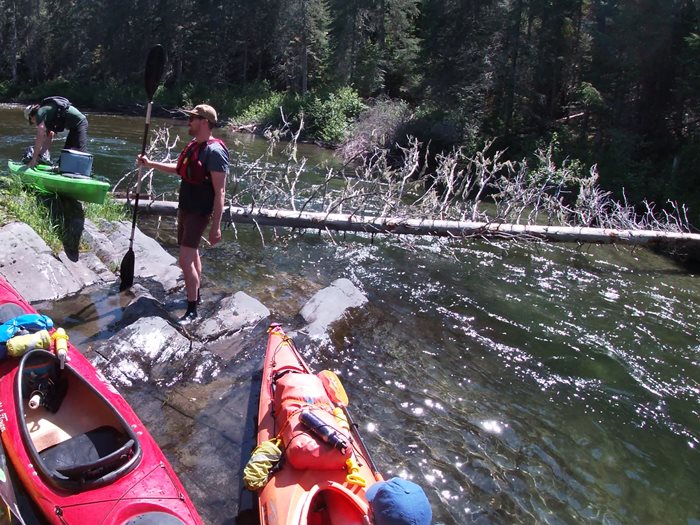 Day 2, not long after push off on a beautiful morning, we hit the Little Main Restigouche with about 20 km down to Chalet Restigouche where we'd stay on night 2, where a few more people were joining us and we'd restock our supplies. There is a beautiful Irving lodge not far after on the right. 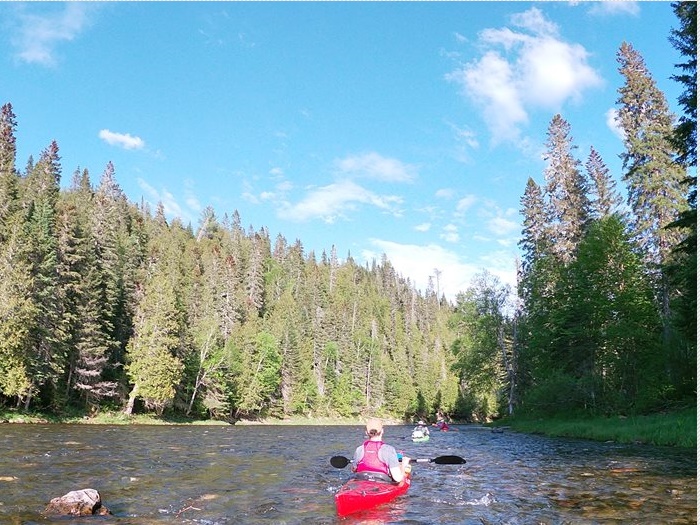 Perfect weather on the Gounamitz

As you slowly meander down the small, shallow, curvy and for the most part, boring Little Main, there isn't much to speak of other than the locals fishing at a few spots as this lower stretch is open to the public for salmon fishing unlike 95% of the Restigouche. Although we did find the intact skull and full spine of a deer. The weather changed to clouds, showers, a head wind picked up which soured the mood and we were happy to land at our destination around 3 pm.

The Little Restigouche river was rather slow, wider than the Gounamitz and no rapids to speak of whatsoever.

We would lose one paddler the next morning, but two joined us making five for a day trip down to Downs Gulch where three exited and me and one pal (Todd) would continue all the way down to the Rafting Grounds for a 132km trip as I recall. But my story is long enough already.